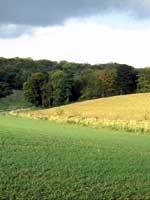 The definition of this habitat is that it should have occupied the same site for at least 400 years; although it is highly likely that many of these old woods have been around for considerably longer.

Oxfordshire is one of the least wooded counties in southern England, as so much of its ancient woodland would have been cleared for agriculture a long time ago. The parts of the county where it has survived are those areas which were managed as royal hunting forests: including Wychwood, Shotover and Bernwood. The other very important area for ancient woodland is in the Chilterns, although a lot has been replaced by the monoculture beech woods which dominate the landscape today.

Traditionally, many of these woods would have been coppiced on a rotational basis to provide timber and underwood for a variety of domestic and industrial purposes. This pattern of management would have favoured many plants which flower early in the season and are now regarded as ancient woodland indicators. These include dog’s mercury, yellow archangel, herb paris, and the rare yellow star of Bethlehem.