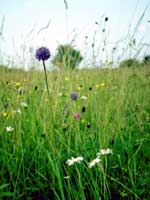 Neutral grassland is associated with soils which are neither too alkaline nor too acid. These are frequently the heavy clay and alluvial soils bordering rivers and watercourses in the flat, low-lying vales. These include the floodplains of the Thames, Cherwell, Thame, and Ock rivers.

In the past, many of these areas would have been susceptible to winter flooding which restricted grazing to the summer months. Many would have been managed as hay meadows, which meant that they were usually cut in mid-July and then grazed until conditions became wet once again.

Although the total area of this habitat has declined drastically over the last 40-50 years Oxfordshire has some of the best surviving examples including Pixey, Yarnton and Chimney meadows.