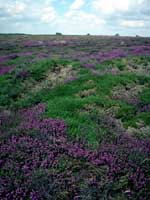 Lowland heathland consists mainly of scrubby species such as heathers and gorse, and is associated with acidic, nutrient-poor soils.

It is an uncommon habitat in Oxfordshire, and the most important surviving areas are on the Midvale, or Corallian limestone, ridge to the west of Oxford and on the Chilterns plateau, particularly around Nettlebed.