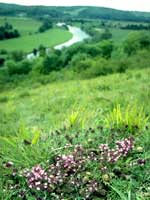 Calcareous grassland is associated with rocks and soils which are alkaline in nature. In Oxfordshire these include the limestone grasslands of the Cotswolds and the chalk grasslands of the North Wessex or Berkshire Downs.

Once relatively common in southern England, it is now largely restricted to the steeper slopes and embankments which have been too difficult to cultivate. Its conservation status is a national priority.

Traditionally, calcareous grassland would have been sheep-grazed, resulting in an expanse of short, close-cropped turf. These grazing conditions favoured many non-competitive flowering plants, which could also cope with the low-nutrient status of the soils and potential drought conditions over the summer months.

Characteristic flowering plants include knapweeds, scabiouses, rock rose, wild thyme and numerous trefoils and vetches. The latter are particularly important as food plants for butterflies such as the chalkhill, Adonis and common blues. Calcareous grassland is also notable for its orchid species including pyramidal, fragrant and bee.