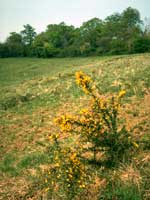 Acid grassland, as its name implies, is associated with acid soils. Paradoxically, it is often the free-draining soils overlying the limestone rocks which have become more acidic over time as the calcium is gradually leached out. As a result, it must have once been a relatively common habitat in the county, but is now largely restricted to small areas in the north of the county, on the Midvale or Corallian ridge to the west of Oxford, and parts of the Chilterns, particularly the commons to the north and south of Nettlebed.

Acid grassland is usually linked to heathland, with its heather, gorse and broom. Sadly, very little heathland remains in the county - although there are localised efforts to try and restore certain areas back to their former glory.